WHOLESALE PRICING TO THE PUBLIC!

How to Have a Bacteria-Free Kitchen in San Fernando Valley

In general, bacteria and food should not mix. It can be a harmful hazard in your home. Bacteria can lead to acute illness, poor overall health, and even compromise your immune system for the long term. There are many products on the market designed to eliminate bacteria in our kitchens and on counter surfaces. In this article, we will look at the types of bacteria commonly found in kitchens as well as the common places for it to grow and thrive. We will also discuss what steps you can use to reduce bacteria in your home.

Listed below are some of the most common bacteria, and while some are less harmful than others, all should ideally be avoided:

Sources of Bacteria in your Kitchen

There are many places bacteria can thrive in your kitchen, and being aware of these can help you make changes to safeguard you and your family.

Work surfaces come into direct contact with both your hands and the food you are preparing. Both need to be kept clean in order to keep the risk of contamination low. Therefore you should always clean worktops before prepping food (especially when raw), immediately clean spilled foods, and avoid cross contamination between raw and cooked foods.

Few people think of their washcloths, hand towels, and sponges as being filled with bacteria, but they are notorious for bacteria growth. This can lead to people unwittingly spreading more bacteria when cleaning. Change and wash any cleaning rags and towels regularly. Keep different hand towels and cloths for different purposes.

Contaminated utensils can easily spread bacteria, and in some cases you could quite literally be stirring harmful bacteria into your food as you prepare it! Wash utensils thoroughly after each use, particularly when preparing raw foods. Don’t use the same utensils for preparing both raw and ready foods (i.e. don’t use the same knife to prepare lettuce if you’ve also used it to chop raw chicken).

Bacteria is all around us and impossible to avoid. However, we can reduce the amount of bacteria risk in our kitchens to our foods by simply washing our hands. You should wash your hands: 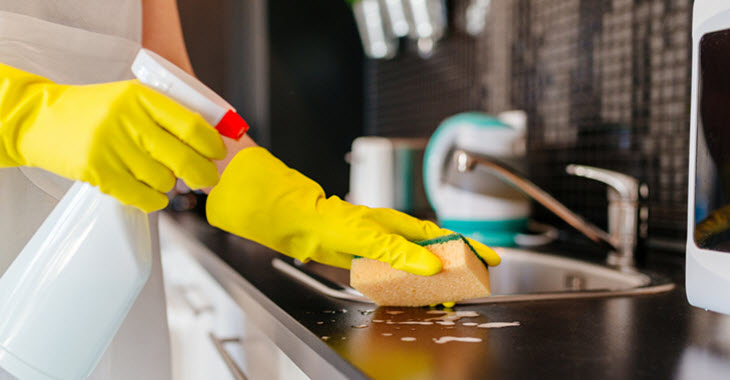 Old kitchen fittings or worn out worktops or surfaces can be hard to clean. They can allow bacteria to thrive, meaning you’re really fighting a losing battle. Therefore, if your kitchen is past its prime, give yourself and your family a helping hand and undertake some kitchen renovations. Let us help you create the kitchen space you’ve always wanted.

Kitchen Emporium is here to help the homeowners of the Southern California areas, including the San Fernando Valley, San Diego, and communities in San Marcos. We offer quality kitchens for the past 20 years. Kitchen Emporium is guaranteed to find you the perfect fixtures and fittings for your home and personal style. We are committed to excellence. The friendly team at Kitchen Emporium offers wholesale prices for quality products, meaning you get a deal as well as a kitchen to be proud of, and with three locations open six days a week, this is the perfect time to discover what Kitchen Emporium can do for you and your home.